The Queen of Mannequins Reaches for a Million

If you were to ask Judi Henderson how, on a whim, she turned an art project into a business approaching a million dollars, she would tell you “I know I’m standing here now because of Renaissance.” She attributes the success of her Oakland-based business, Mannequin Madness, to the confidence, network and knowledge she gained from Renaissance’s Business Planning Class.

When Judi enrolled in Renaissance in 2000, she thought she would join the 21st century version of the San Francisco Gold Rush and build another dot com start-up. While many dot-commers lost fortunes when the bubble burst, Judi credits the class with preventing her from “making a bad dot com business decision.”

She says “Renaissance helped to train my mind to recognize an opportunity and how to act on it when it arose.” When she replied to a Craigslist ad for a mannequin she wanted for a backyard art project, she found not one, but 50 mannequins for sale. Judi jumped on the opportunity to buy the lot and decided to launch a mannequin rental business.

This great idea started as a side-gig, renting mannequins to customers out of her garage and growing her inventory by acquiring mannequins that large department stores would otherwise dump in landfills. As the business grew, so too did her ambition. In 2015 Judi decided she was ready to join the ‘million dollar club.’She has observed that most women tend not to try to reach that level. She wants to aim higher than ever and be a role model for other women in business.

After working with business coach Gwen Wright of The Wright Consultants, who also runs Renaissance’s Financing Resource Center, Judi increased her sales by 10 percent and her profit margin by roughly 25 percent. Judi says she’s now well on her way to joining the million dollar club.

If you could place a dollar amount on the pride she has for Renaissance, the Oakland community and giving back, it would exceed a million dollars by a long shot. “I see myself as an Oakland ambassador,” Judi beams. Motivated by her million dollar club ambition and guided by The Wright Consultants, Mannequin Madness now has a storefront people from all over the Bay Area visit. On occasion she hears from potential customers that they are reluctant to visit Oakland because of its bad reputation, but she knows better and sells people on Oakland just as much as she sells them on her mannequins. 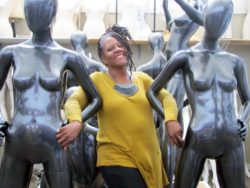 Judi sees businesses like hers as part of the solution to making Oakland a more welcoming place. Her business creates jobs (three employees and five contractors thus far), increases foot traffic in the area, and adds vibrancy to the community. She also gives back by providing a temporary pop-up retail space to smaller start-up fashion businesses. Every three months her business prevents approximately 100,000 pounds of mannequin waste from entering landfills.

Judi went down many other career paths before becoming a confident entrepreneur. She studied journalism in college, but never applied it to her career. She worked in corporate sales and technology during the dot com boom. She had a business in her thirties that failed. After that she thought she just “sucked at business.” But Renaissance helped her shift her mindset and grow the confidence she needed to be a business owner again. In her own words, “It gave me the opportunity for a new life.” 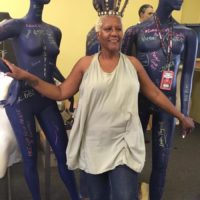 Share with your friends
Submit
« Donate to Renaissance and Win a Two-Night Stay in Napa Wine Country!
Fall in Love with Chicks and Love Pizza Patio »