On June 18th, 2016 a five-alarm fire devastated the 3300 block of San Francisco’s Mission Bernal neighborhood, destroying six businesses – including several legacy businesses – displacing 41 residents, and causing about $14 million worth of damage. After the firefighters put out the fire, leaving the residents and business owners with the charcoal skeletons of what once were their livelihood and homes, the next emergency responder was Eden Stein, owner of Secession Art and Design. But Eden may not have been there to help had it not been for Renaissance.

When Eden lost the lease on her retail space in August of 2014, the first emergency responder to help keep Secession in the Mission Bernal neighborhood was Renaissance. In order to apply for a San Francisco Mayor’s Office of Economic and Workforce Development  Invest in Neighborhoods loan from Working Solutions – a nonprofit lending organization – she needed to have a stron loan package and be able to convince a loan committee of 5 that she had a long-term vision and steadfast commitment to her business and her neighborhood. After spending hours with Renaissance’s Financing Resource Center’s managing consultant, Gwendolyn Wright, she built the confidence and financial plan to win the committee’s approval and secure a loan.

While receiving  a relocation loan was the most crucial assistance Eden received from Renaissance, she also credits improving her operations with an intensive Quickbooks Bootcamp, and workshops on inventory management, public relations, sales, and employment law.

A 20-year resident, she recommends Renaissance to other business owners in her network.

A community organizer and President of the Mission Bernal Merchants Association, Eden was a pillar of support when the Mission Bernal Fire hit. The day after the fire, she started organizing a fundraiser. She continued to work with merchants to help them when their insurance claims weren’t coming through and gave them contacts at the city planning department. She used Secession as a meeting place to help those affected by the fire, and collected needed goods such as strollers for babies, phone chargers to keep lines of communication open, and chairs for the elderly.

“People thought I was crazy to open a retail gallery space here.”

Hillary Ronen, Supervisor of San Francisco’s District 9, which encompasses the Mission Bernal neighborhood, nominated Eden for an annual recognition during Women’s History Month, that acknowledges an outstanding woman who is a courageous community leader.

She received the reward at a Board of Supervisors Meeting on  March 7th, 2017.

Eden sees Secession as something much greater than a gallery, boutique and workspace. It’s an extension of her home, a community hub, and a safe place for events where anything can happen. One moment someone might stop by just to say ‘hi,’ and the next, someone might spontaneously start breakdancing (it really happened!). She especially enjoys the moment when she helps someone find a work of art she knows they will live with and bring joy to their lives. 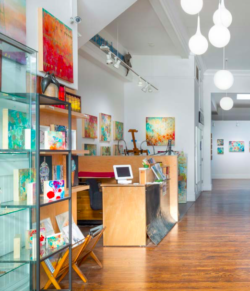 She is as connected to her customers as she is to the artists she represents. She plans her art shows a year ahead and, visits artists studios regularly to help guide the direction of their work to create a successful show. In fact, the first iteration of Secession ties into her sustained love of an artist’s work.

Eden’s long-term art crush on artist Heather Robinson’s work began in 2003 when she came across her art in an show organized by the nonprofit arts organization City Art Gallery on Valencia. She immediately fell in love with her work. Though she couldn’t afford it, she was determined to find some way to own a piece, and arranged to do a work-trade so that she could have Heather’s art in her home.

Then in 2007 when Secession Arts emerged as a new business with a retail component, regular events and five artists’ studios in the corner of an architecture firm, Eden invited Heather to rent one of the studios. As the business transitioned through two moves and narrowed its focus on retail and events, Heather has remained Secession’s sole artist-in-resident and has been working by Eden’s side for ten years.

Eden herself used to be an artist, making vintage beaded jewelry, but now sees Secession as her masterpiece, and the 60 plus artists and designers she represents as her muses. And these muses have lead her to follow her passions through trying times and not to be discouraged by critical nay-sayers. 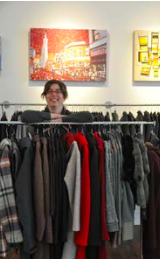 When she first moved to the Mission Bernal neighborhood in 2007 she was the only retail shop on the block. “People thought I was crazy to open a retail gallery space here,” she reflects. But as she networked with community members and cross-pollinated with other businesses on Mission Street, like her neighbor, Emmy’s Spaghetti Shack, her following began to grow, and so did her neighborhood and her business. She now has one part time employee and works with about four contractors throughout the year. And of course, continues to rent a studio to her art-crush Heather.

The heart of a neighborhood is not the houses, the retail shops, or the public places, it’s the people who inhabit and nurture those spaces, feel like they belong and have a sense of ownership and pride in their surroundings; the people who get to know their neighbors, organize gatherings and create community.

Like Secession, Renaissance is driven by the value of building communities and neighborhoods, and creating a safe and welcoming space for people when they need help. Whether through preparing for a terrifying loan committee, or initiating a fundraiser for fire victims, the passionate people behind small business are the heart of our vibrant Bay Area neighborhoods and communities. 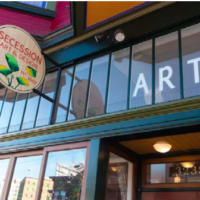