Yvonne Hines had a passion and talent for making mouthwatering Southern American style homemade sweets and specialty desserts. For years she treated her family and friends. When Yvonne learned she was pregnant with her daughter, and knew she couldn’t afford child care on her salary, she knew it was time to start selling her signature pralines at local events and social gatherings. In 2005, Yvonne took the plunge, quit her low-paying job and came to Renaissance Bayview to take her business full-time.

At Renaissance, Yvonne received the assistance she needed and gained vital access to ongoing business support and resources. She completed business training and received technical assistance to expand her business.

In 2006, Yvonne opened a storefront business located on the Bayview’s Third Street Corridor. Her bakery features the very best pralines, butter cookies, red velvet cake and delicious baked goods made by Yvonne herself.

Yvonne’s hard work has paid off – Yvonne’s Southern Sweets has been featured in the San Francisco Chronicle, SF Weekly, Sun-Reporter, and SF Examiner, among others. Yvonne also appeared as a featured chef at Macy’s in San Francisco’s Union Square Flagship Store.

Yvonne believes that Renaissance has played an important role in her achievements. “I’m so grateful for all the help they have given me and I know they will always be there for me,” says Yvonne.

Not only is Yvonne a business leader in her community, but she is also an inspiration to her daughter who grew up with Yvonne’s Southern Sweets. While she speaks with great pride of her mother’s business success, Yvonne’s daughter is hoping to realize her dream of becoming a lawyer.

In 2012, Renaissance honored Yvonne for her business success and local community involvement and contributions with the Cheryl Evans Memorial Award.

In 2015, Renaissance was able to help Yvonne secure a loan to purchase a new oven. That allowed her to now bake on-site, saving her time and money and bringing the aroma of fresh baking to Third Street. 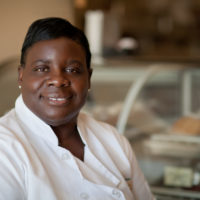