Alicia Lopez of W & A Transport

Alicia Lopez, owner of W&A Transport, emigrated from Mexico in November of 1986 with her husband Jose Luis. They arrived with only the clothes on their backs, and today run a successful and sustainable interstate trucking business.

After years of working on the production line and as a mechanic for a Bay Area soap manufacturer, Jose Luis was injured on the job and forced to make a career change.

He took a truck driving class in December of 2004 and a year later he and Alicia purchased their own truck.

Alicia came to Renaissance/Start Up in August 2007 after hearing about the program on the radio. She signed up for Business Plan Part 1 and learned about financial literacy and how to better manage and organize their fledgling business. She later enrolled in Business Plan Part 2 and in August 2008 was awarded a Women and Co® Microenterprise Boost Award, which provided a $2,000 cash equity investment into the business.

Alicia was also awarded an eBay Foundation Techquity grant at the end of 2008, which she utilized to purchase a laptop and QuickBooks, further streamlining the business’ operations and finances.

While the competition was folding due to sky-high fuel prices, W&A Transport expanded, adding routes outside of California and working with additional brokers. The company hired its first employee, a second driver, in December 2008.

The recession did not slow the expansion of W&A Transport as Jose Luis and Alicia purchased a refrigerated trailer a month later. Now the company can transport both dry goods and the more lucrative perishable cargo.

Alicia recalls meeting other Renaissance graduates and the inspiration and motivation she drew from those encounters. Today she continues taking classes, attending workshops and working with the Program Manager at Renaissance/Start Up to expand her business. She looks forward to serving as a mentor to emerging entrepreneurs so that others can benefit from her experience.

Alicia and Jose Luis are the proud parents of their son Christopher, 21 and daughter Whitney, 20. 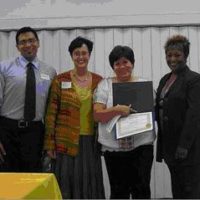