When Getting Your Business In A Pickle Is A Good Thing

Kelly McVicker, owner of McVicker Pickles, never imagined that her rural upbringing in Kansas would become the inspiration for her business. Nor did she imagine there would be such great demand for her pickles. In fact, there’s been so much demand that she is facing the same growing pains as many other small business owners.

After less than 3 years of being in business, McVicker’s Pickles are now being distributed through Good Eggs, an online groceries service offering locally sourced goods, and are available at several markets and cafes in San Francisco and the East Bay.

Kelly has also worked out an arrangement with Pig & Pie, a hip restaurant in the Mission, whose kitchen space she can use in order to make and store her pickles. Pig & Pie serves a “Pickle Plate” on their menu which features McVicker Pickles and also has a retail shelf offering jars of her goods.

But how did she get to this point?

Kelly had been part of the youth organization 4H Club as a young girl, where she learned home food preservation. And her grandparents owned a farm, from which she canned and pickled vegetables.

Later in life, her career took a different path from her childhood. She had studied International Relations at Duke University and worked in women’s human rights for 8 years. Eventually, she got tired of the office life and wanted to do something with her hands. Something that happened to be pickling!

Although pickling began as a hobby and as a way to give gifts to friends and family, her business began to grow organically.

[McVicker’s Pickles is currently housed at Pig & Pie restaurant, which used to be Discolandia in the Mission]

When she took Renaissance’s 14-Week Business Planning Class last year in March, 2014 Kelly had already been in business. She decided to take the class in order to get a structural foundation in the form of a business plan.

Renaissance’s 14-Week Business Planning Class was valuable in helping Kelly develop confidence in her skills, understand her financials and get a realistic grasp of her costs. Having these financial projections in place allowed her to make business decisions based on reality.

After graduating, Kelly continued to get help and sought free consultations with Gwendolyn Wright, Renaissance’s Financing Resource Consultant. She also worked with another Renaissance Consultant, Cecilia Culverhouse, in order to create an Individual Development Plan (IDP).

When it comes to the struggles of being a small business owner, Kelly cites having to wear different hats as the boss and the sole employee of her business as one of her challenges. This has recently been alleviated with the help of an intern who she found through SFMade.

[A diverse array of flavors. Try them all!]

Another big challenge for Kelly is her need for a larger production space. In order to grow her business, she needs a larger space to make and store her pickles. But space is at an all-time premium high in San Francisco, which means she may have to take out a loan. But taking on debt can be a challenge in itself!

For many entrepreneurs who are just starting to grow, taking on debt can be scary. So in order to overcome her fear, Kelly is looking at her financials and business plan with a cold eye. She is also using her network of friends and family to get different perspectives and build her confidence.

When asked about where she sees herself in 5 years, Kelly hopes to see McVicker Pickles distributed and known throughout the west coast and even globally. There is also an educational component to her business that she would like to grow including working with after school programs to teach kids about preservation techniques.

She also teaches private workshops for corporate groups and organizations looking for a fun team-building activity. Last fall, she was certified as a Master Food Preserver through a UC extension program, which ensures that she is up on the latest food safety research on home preservation.

[Proudly made in San Francisco!]

Now that she is a “seasoned” business owner of McVicker Pickles, Kelly would like to share this piece of advice for new entrepreneurs:

“Take Renaissance’s Business Planning Class! You can research and look at a million ways that you can fail. But just jump in! Then take a step back and get that guidance to create your business plan.” 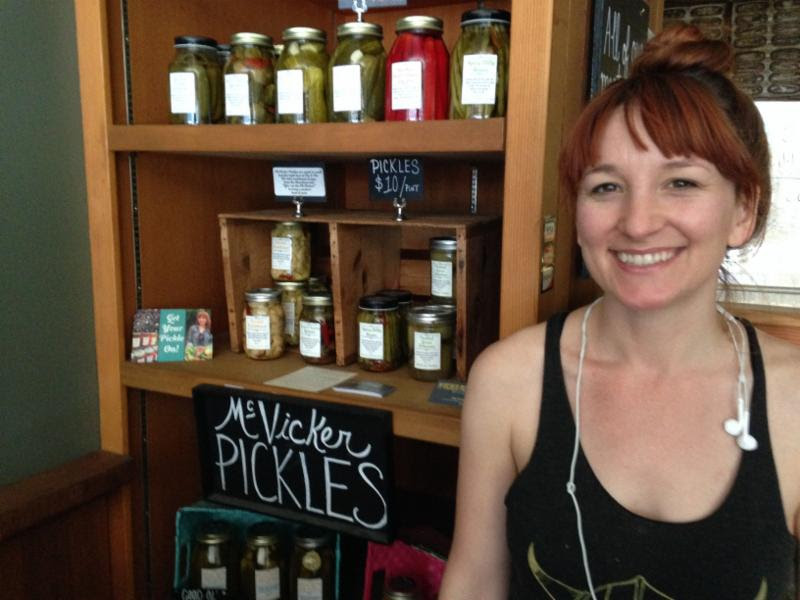 Share with your friends
Submit
« A CEO’s compelling story – From working with HIV positive kids to starting an organic scrubs biz.
Hey Foodies, come check out the Renaissance Pop Up Café at our Annual Event! »